Click on images for a larger view
After a cold and snowy mid  December, today in Southern New England found highs into the upper 40's and low 50's ! The "bump up" continues into Saturday as well as highs will be in the 50's for many to near 60°. The same holds true for most the region on Sunday as well. With Temperature fluctuations  like this there surely will be some weather impacts expected as well. A frontal boundary is draped across the lower Great Lakes this eve and into central and northern New England and a couple waves of low pressure are expected to ride along that frontal boundary through Monday am bringing with it showers, downpours, possible thunder, strong wind gusts and warmth to the south of the boundary and potential ice , wintry mix and snow well north of the boundary. 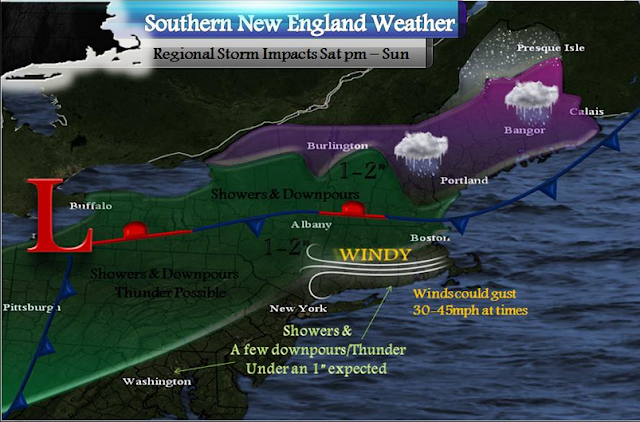 The heaviest precipitation through Monday is expected to occur along and north of the front. If it were plain rain there would not be any issues but as temperatures skyrocket in the mid-upper levels of the atmosphere, surface temps will remain below freezing for many to the north of the front and that will bring a potential Ice storm to parts of northern New England Saturday night into Sunday especially but possibly not limited to central and eastern New Hampshire and much of Maine away from the immediate shores. South of the front surface temperatures will soar to about 20-25° above normal for this time of year with highs near or over 60° for much of SNE on Sunday. Dewpoints (measure of humidity) will be in the 50's too. It will feel almost muggy for the 1st *full* day of Winter on Sunday south of the front. The area to watch for potential *brief* icing would be extreme northern Middlesex County in eastern Ma as well as Essex County. I am not expecting any major concerns with the potential for ice but it does not take much . What is really insane is that temps near the MA/NH border will be in the 30's and near Taunton Ma and other areas in SNE it will be 30° milder! Such a short distance for such a gradient. These changes in the lower & upper levels as well as a screaming ridged Jet Stream into Canada will bring the potential for strong wind gusts into SNE late Saturday eve through Sunday on the order of 30-45 mph.  As low pressure works off to the west and north of SNE late Sunday , cold west northwest winds will start snap back in here late Monday and especially Tuesday. Monday is the transition day though with still many SNE readings in the 50's . Its from that point on though that an arctic blast of air starts to get ushered into our area with highs remaining in the upper 20's to low 30's on Tuesday. A very cold Christmas Eve is shaping up into Christmas Morning with many teens likely away from the southeast shores. As low pressure works off the Northeast coast early Weds, winds will turn north over the relatively mild waters of the Atlantic and we could even see some Ocean Effect flurries or snow showers on Christmas Eve Day over Cape Cod. For SNE High pressure will be overhead and the forecast for Christmas looks like clear skies, calm winds and cold in the 20's and 30's . Below are some modeled images for Sunday Afternoon

Posted by Anthony Siciliano at 5:54 PM