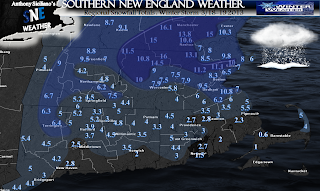 CLICK ON ALL GRAPHICS FOR A LARGER VIEW
Many folks are just finishing  brushing off from yet another late Winter 2013 major snowstorm for Southern New England. The late surge of winter continues now as we have officially welcomed in "Spring" now.  Upstream strong Greenland Blocking (-NAO) has really had a hold on us since early to mid February and shows no immediate signs of losing its grip on our area which means more below normal temperatures and a stormy/active storm track right into early April. There are now subtle signs that Spring may spring after the first week of April, but can say that that is not a given just yet. With our latest snowstorm , impressive numbers keep rolling in and records continue to fall. Worcester has been and continues to be the snowiest city in the Untied States this season (^ population of 100,000). Many locations now have set records for the Snowiest February and March combination ON RECORD  and some dating back to the 1915-16 season.  It really has been a very impressive Winter considering there were many folks ready to put this one in the bag ! The snow is just one aspect that will make this season now memorable, the other is the relentless battering and reshaping of our beloved Southern New England shorelines. 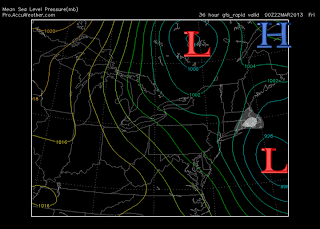 So, here we go again, our next system comes in Thursday afternoon and overnight. This is not a direct hit from a coastal storm rather another potential Inverted Trough or convergence zone setting up between a vigorous Upper Level Low Pressure system off to our northwest  and another surface low well to our south and east. This will focus an area of snowfall to break out near the East Coast of Southern New England anytime after 11am though probably more likely towards 2-3pm and continue through the evening hours and possibly linger right into Friday morning especially for the outer Cape and Nantucket . All levels support snow, fluffier to the west and a bit wetter to the east. There lies a compromise where heaviest precipitation looks SE, with a bit less west though a drier snow. Dewpoints will be marginal on the outer Cape though temps aloft will be plenty cold enough. Not many if other impacts are expected with this storm other than the timing again may be rough with the evening commute, especially east of Interstate 95 , Route 3 in eastern Massachusetts and Route 6 along Cape Cod. So all in all a low impact event but yet another shot at a potential plowable March snowfall in the Winter now that seems to never end. 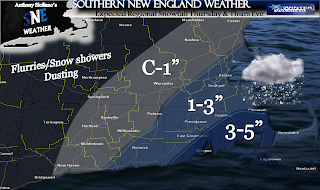 <<<EXPECTED SNOWFALL (REMEMBER TO USE AMOUNTS RANGE.. LOW #'S  LIKELY, HIGH POSSIBLE)
This may not be the last of it, and If I were a betting man, it is not the last of it. The presence of a remarkably Strong Greenland Block much like December and January of 2010-11 and 1995-96 will continue and the 500mb pattern will continue to remain conducive for coastal development. There is also a potential bigger storm in the works for Monday and Tuesday which looks like a potential carbon copy to the one that just passed. Stay tune for more on that. Thank you for reading and hang in there Spring lovers, this is the price we pay for that amazingly gorgeous early Spring last year which featured many in the 70's and low 80's at this time. Certainly not the case this yr.   ~ANTHONY
Posted by Anthony Siciliano at 5:25 PM No comments: 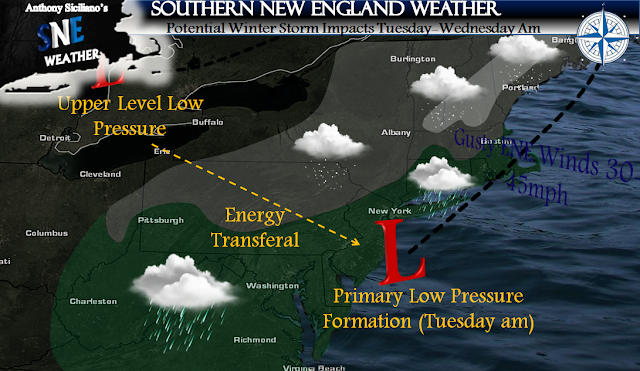 Fairly quiet but seasonal cool weekend ahead for many this Saint Patrick's day Holiday weekend. There could be a few renegade snow showers from time to time especially Saturday though High pressure is expected to crest over the region Sunday and Monday keeping us dry and tranquil. The next weather system we are watching is for Tuesday into Wednesday morning. Timing is a bit suspect at this time as it may come in a bit early than that, possibly Monday night. As of now Low pressure forms off The New Jersey coast very late Monday into Tuesday morning and looks to take a track right over eastern Southern New England and perhaps right through the Cape Cod Canal area. There is still plenty of time as we are 4+ days out from event and a lot can shift. I do not expect any major shifts but slight ones will make a BIG difference this time of year as we are moving towards the end of winter officially. A track this close would mean perhaps brief snow burst for may to mix and to rain for the bigger cites and along and east of the Interstate 95 corridor. Where the colder air at the surface and aloft remain colder , wintry mix and snow will persist longer in those locations which look to be north of the Massachusetts Turnpike and the higher elevations.  The potential is there for those that do remain all snow  for a Warning type snowfall over 6". Again, much time to iron out and watch trends in the forecast and guidance as  the mix line can and likely will  wobble either south or north. Either way a period of strong wind gust are possible for a brief time into Tuesday on the order of 30-45 mph favoring locations near the coast and especially Cape Cod and The Islands. Again, nothing set in stone expect the storm now looks likely and likeliest locations to receive measurable snow are now (but not limited to) north of the Mass Pike and especially higher elevations with potential for further adjustments north or south in time. I will be watching when I have the time to this weekend. For now I am packing and heading off to Lincoln New Hampshire Saturday and Sunday for a Zip Lining adventure with my Brother and Nephew.  First Time ! Hope you all have a happy and SAFE Holiday weekend   ~ Anthony
Posted by Anthony Siciliano at 5:03 PM No comments: 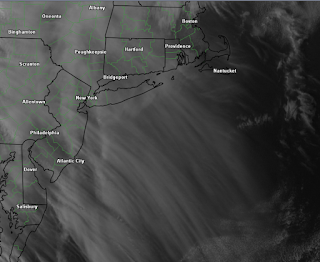 High Cirrus clouds can be seen this eve increasing to the south and southwest of Southern New England in advance of our next weather system. Monday was another spectacular day with many in 40’s and 50’s and more of that high March sun angle doing its thing melting a good deal of snow once again. Sun setting later helps with everyone’s past Winter Blue’s though lets not forget Winter does not end officially until March 20th. Upstream Greenland Block again re-establishes itself after the passage of this next system and brings at least 2 more opportunities of wintry precipitation before March’s end. Signals that one of these events could be significant. 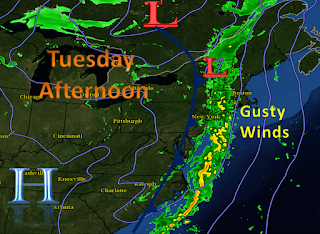 Next storm is a cold front stemming from an Upper level Low passage well off to our north and west. Moisture increases starting this eve with high cirrus clouds and begins to lower through the night ahead of a southerly flow ahead of front passage. We cant  rule our some drizzle or a light shower overnight Monday into early Tuesday am during this moistening process, though the air is fairly dry so does not look like much of a big deal at all. More clouds lower into Tuesday am and more and more scattered showers will begin to form and move in from the south and southwest.  It appears as though the heaviest moisture associated just along and or ahead of the actual front passage comes into western Southern New England zones after 10am Tuesday. This seems a bit ahead of “schedule” to previous thinking. Slowly showers and heavier downpours will increase and continue the track to the east towards and reaching the eastern areas by the evening commute. That timing does not look good for folks commuting near metro Boston and in fact for all commuting up and down the interstate 95 corridor . In addition to the heavy downpour potential will be a period of  gusty winds increasing as early as Tuesday mid morning on the order of 30mph for many and increasing to near 40-45mph as the day goes on especially south and east of The Massachusetts Turnpike. Also to note that a rumble or two of thunder is not out the question. 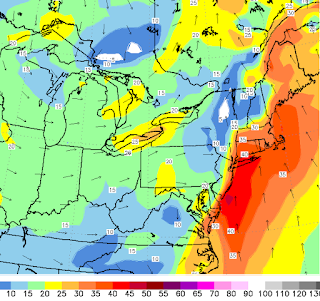 Overall it looks like the consensus of guidance at this time is indicating ½”-1.00” of rainfall looks likely. Perhaps a few isolated higher amounts in heavier downpours possible. For this reason and in combination of still a deep snow pack (for some) despite recent melting has prompted the issuance of a *Flood Watch*. The watch is in effect from Tuesday afternoon through Wednesday morning and any flooding is expected to be minor and confined to small streams. Those in prone areas should watch for potential warnings which means flooding is either happening or imminent. Hopefully the latter. 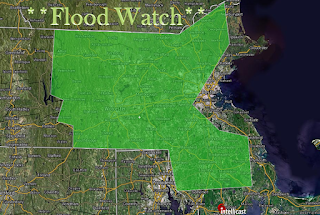 After that storm passes it appears as though strong upstream Greenland Blocking (-NAO) will once again take shape and cooler weather ensues. There are also a couple systems of note to keep and eye on as the 500mb pattern again becomes conducive for coastal East Coast development. All will be monitored and further info will be issued as it becomes available    ~Anthony

Another Winter Storm Bears Down on SNE

March did not roar in like a lion as it could have though indications that winter was going nowhere still hold true and now we have a potential major storm on our hands. The lack of confidence with this one is simply due to one on our more reliable models is not indicating as big as a snow threat and a low pass a bit farther to the south than the rest on the pack. The pattern has slowed enough for release of previous blocked storm and high hold to the north and now indicates a trip further north towards our area, and a slow trip at that and then a stall a bit further east than normal, though this should be a large storm . 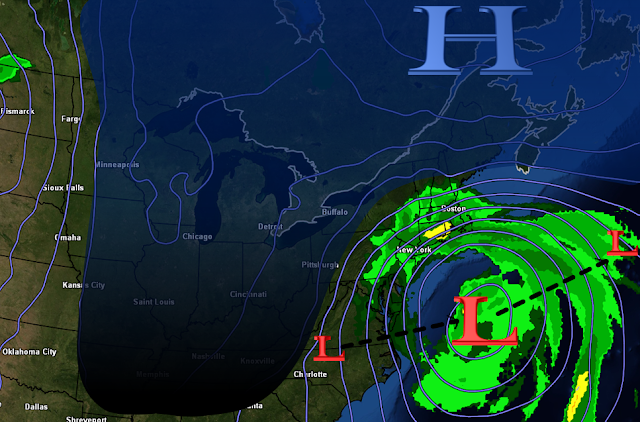 WHAT IS LIKELY: Regardless of the slight model spread a few things look certain.

WHAT IS STILL BEING IRONED OUT:  Although we are now fairly close to the start on the event, it is kind of a breaking weather news story as I personally thought blocking would simply just be too strong and the storm would suppress mostly to south in the end. One model still suggest that to some degree, but has also started to trend to the north itself and so the alarm bell sounds !
So there is a brief rundown as to where we stand now. Coastal residents should start their routine coastal storm preparations and those farther Inland should start to prepare for possibly losing power anytime between Wednesday night and Late Friday time period. I will not leave you high and dry without an idea on how much snow may fall.. If less mixing, some could see a bit more, if more mixing some less..especially the immediate coast. (be sure to click on all images for full size views) 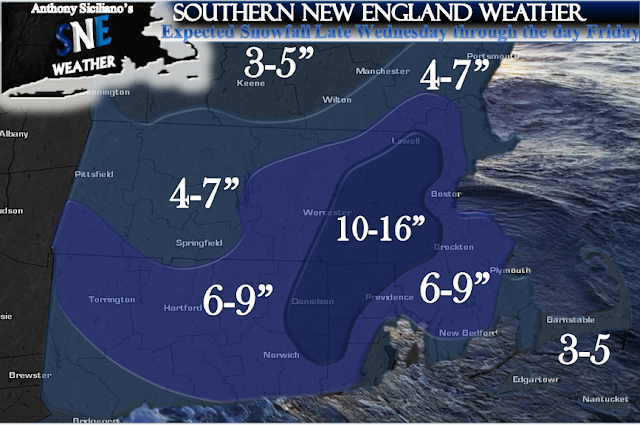 Thanks for reading and stay tuned for further updates   ~Anthony 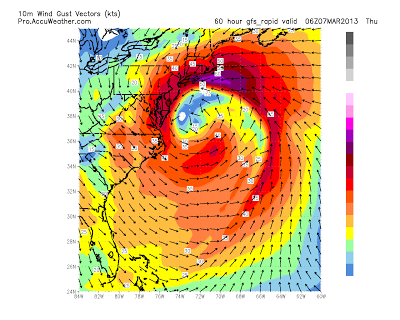 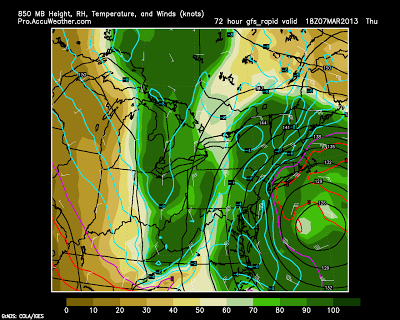 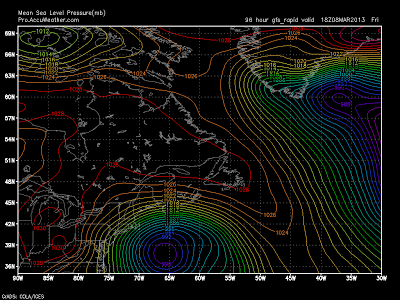 A look at the strong upstream blocking over the Northern Atlantic
Posted by Anthony Siciliano at 5:57 PM 2 comments: